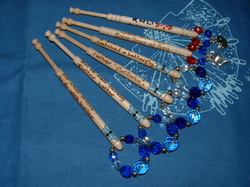 Winslow Bobbins
I have been buying bobbins from Winslow Bobbins since I started to make lace.  For many years past, lacemakers have inscribed their bobbins with words or phrases.  A young lad might carve a bobbin and inscribe 'marry me' on it for his love.  Proverbs or warnings might be included and some of the most sort after bobbins are those which commemorate hangings or murders.

Just two of the Winslow Bobbins that I have bought over the years.

Mainly famous for their light coloured yet pyrographed bobbins, Winslow have been a stalwart of the lace days with a commemorative bobbin to remind you or your day out.  Lately I have been buying their named wood bobbins which have some beautiful curves, these just fit into your hands when you are making lace and the shape of the bobbin works with you.

Look out also, below for the dark ebony bobbins with the blue / green beads on the spangle.  These beads are mood beads and change colour.  As a teenager in the 80s I always wanted one of those mood rings but could never afford them.  You can see why I bought these at the last Isis lace day as soon as I saw them.