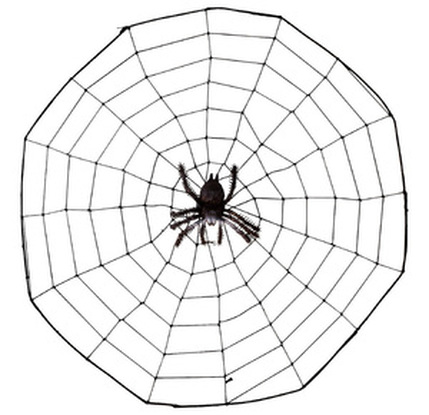 Arachne was a weaver in Greek mythology who claimed to be the greatest at her art.  Greater than that of Minerva.  Boasting that you are better than the gods always resulted in in something nasty happening.  Because Arachne would not acknowledge that her skill came, in part, from the goddess of craft and wisdom things got bad.  In the end, Minerva turned Arachne into a spider.

Spiders and webs go together.

So Arachne is our spiritual home on the web.

It is also where you can find details of the lacemaker's mailing list where you can sign up for emails between you and other lacemakers around the world.

There are two lists - one for lace related talk and a chat group for the things that strike you and you want to share but are not strictly to do with making lace.  Membership is open to all lacemakers and it is a wonderful community that has been going for over 20 years. 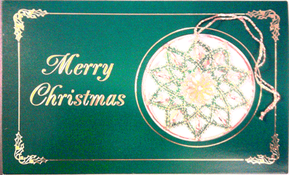 Each Christmas, Arachne offers it's members the opportunity to make and exchange a lace based Christmas card.  The type of lace is completely upto the person making it.  It could be one of the bobbin lace disciplines, tatted, crocheted, needlelace, knitted, fillet, ..... the list is as endless as the imagination of the lacemakers.

If you would like to see the results of this year's exchange (and the chance to see previous years) then they are all stored on the web thanks to Jenny Brandis' website.

My pattern was by Christine Springett and as I was sending it to Australia, I made it in green and gold for their national colours.  Unfortunately, it photographed really badly as both the card and the lace reflected the light.  Still, once off the card, hopefully it sparkled nicely for Marion, who I sent it to. 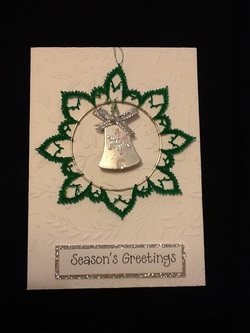 This was my completed card for that year.

The pattern is again by the wonderful Christine Springett who I have been a fan of for more years than I should admit to.

It was fun to make and I hope my exhange partner will enjoy owning it as much as I enjoyed making it.

The bookmark is from a pattern by Lacewing Designs.  I decided to make it rather than flowers but to look like butterflies with the gimps.

The blue threads are antique Perivale silks that I bought many years ago from Dedennes in North London (now sadly gone).  Whilst the metalics are from Biggins Lace who have some beautiful patterns and threads.

At Isis Lacemakers we had all gone butterfly made so I just had to adjust the pattern this time round.