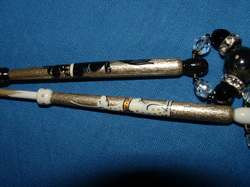 Sallie Reason
Sallie Reason was a very gifted bobbin painter who had a wonder abilty mixed with a sense of humour.  I unfortunately discovered too late to build a collection as she passed away in January 2011.

Often described as whimsical, Sallie's bobbins were always beautifully executed and importantly, sealed well so that they were a delight to handle.

The two pairs that I have are both based on heraldic beasts.