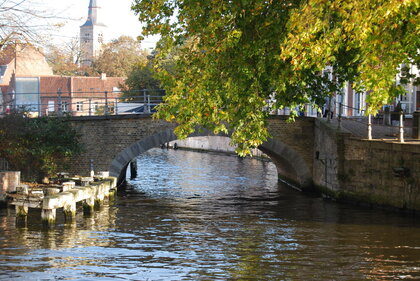 In 2009 we visited Bruges. As a lacemaker, the first thing you do is obviously visit the Kantcentre but as this was our second visit, we took the opportunity to explore further than last time.

Because we drove from the UK to Belgium we took the decision to stay the Novotel on Katelijnestraat, a simple decision as it was one of the few hotels with parking yet it was really close to the centre of Bruges and gave us an excellent centre to our visit.

We had gone at the end of November, just as the Christmas Market opened and the Christmas decorations were coming out. Whilst walking up the Katelijnestraat I saw a shop window that was full of Christmas inspired embroidery and so discovered 't Handwerkhuisje. A lovely shop with some beautiful needlecraft equipment.

It is always interesting to see what unfamiliar things are on sale from familiar suppliers, just because you are in a different country.  My husband bought me two things from this shop.

Firstly a beautiful pair of scissors by DMC.  I'm always putting my scissors down when sewing or finishing my lace and whilst these are embroidery scissors rather than lace scissors (lace scissors have a different shape to the blades), the chain and holder are just perfect.
Secondly, he bought me a case with a picture of a lacemaker on  it.  The illustration on the box is from the painting; 'The Lace Maker' by Russian painter Vasily Andreevich Tropinin, completed around 1823.  The tag on the box did have a brand name on it but not one I have been able to find through search engines.
The box is wooden construction with a faux leather handle and studding.  The picture is printed onto a canvas base and attached to the box carcass. 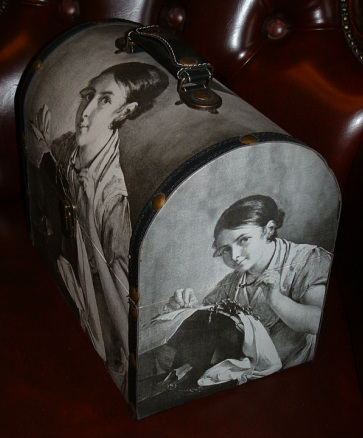 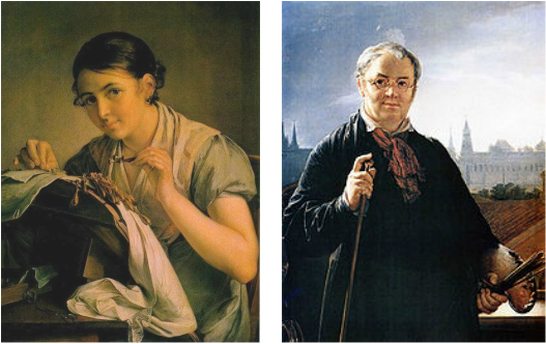 Tropinin was a Russian Romantic painter first exibited in 1804 but predominatly active from 1823.  He was born a serf and was sent to Saint Petersburg to study as a confectioner but instead attended the Imperial Academy of Arts, in secret, where he took part in free drawing lessons.

In 1799, he was allowed by the Count who held his serfdom to study at the Academy as a non degree student and exhibted there in 1804.  He was recalled back to the Count's estates shortly afterwards and put to work as a confectioner.

The Count changed his mind and allowed Tropinin to spend time copying works by European and Russian painters and produce in 1813 a family portrat of the Counts Morkovs.

However, he did not obtain his full freedom from serfdom until 1823 and it was in this year that he presented his painting of the lacemaker at the Imperial Academy of Arts.  The Lacemaker, along with The Beggar and The Portrait of the Artist Skotnikov which were all presented to the Academy together, resulted in him receiving the official certificate of a painter.  This achievement was capped in 1824 when he was elected to teh Academy.

Painting over 3000 portraits in his career he was a prolific artist who is still very much regarded both in his native Russia and abroad.  Moscow is home to the Tropinin Museum.