Unknown Makers - Do you know these bobbins? 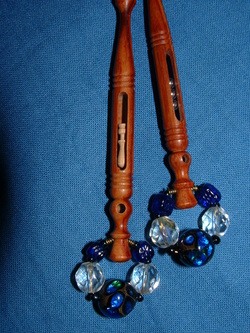 Unknown mother and baby
Sometimes, normally at the end of a lace day you buy something and didn't quite get the supplier's name.  If you have any idea who the makes or the bobbins shown on this page are I would really like to know.  Please email me at thelacebee@btinternet.com with any help you can give me.

The mother and baby and captured ball bearings were bought at the Uxbridge Lace Day in 1993.  Always one to spurn superstition I bought the mother and baby bobbin.  The square beads at the top of the spangle are from Tuffnell Glass.

After all, you are talking about the woman who got married in green and went to the wedding with her husband to be.  Yes, we throw biscuits in the face of superstition and blow raspberries, with wiggly fingers, at fate!

In January 2004 my husband (now who was 'to be' then) came back from Australia to live again in the UK.  When he flew in we went on a tour round some of my favourite places; Stratford upon Avon, Worcester, the Cotswolds and the city of Chester.  Just off from the Elizabethan shopping runs there used to be a small needlecraft shop and when we visited there on that trip I bought four bobbins.

They are a little chunkier than my normal choice, but there was something about the feel of them that made me want to buy them.

Two of the bobbins (one rosewood and one ebony) have inlays of pewter... Perhaps a foretelling of my obsession with Chris Parsons' beautiful inlaid pewter bobbins.  A fellow lacemaker has suggested that these two bobbins may well be by Acorn Bobbins, but we have now taken to calling them my 'not Acorn Bobbins'.

However, I have made a discovery.  While browsing Jo Firth's stand at an ISIS laceday, I saw the banded pewter bobbin but in ebony.  I asked if either Jo or her husband, Ash, knew who the maker was but all they could tell me is that were made by a maker from Cheshire who they bought the stock of when he stopped turning bobbins.  This bears out my buying them in Chester but draws me only a little closer to identifying them.  I emailed the group and whilst they remember a bobbin maker they couldn't put a name to the maker.

Of the other two; one is ebony with a silver ring whilst the other one is, if I remember correctly, tulipwood with rings made from the same piece of wood surrounding the base.

I very rarely buy raffle tickets - I have a strange thing about gambling in any form so I normally prefer to 'donate' the money to the group rather than buy the tickets.  Every now and again I can't get out of it and I buy a couple of tickets and on this occasion in 2005 I won a pair of bobbins which are apparantly Tasmanian Black Wattle.  I know this because it says so on the bobbin.  See, sometimes I'm quite intelligent!

The spangles have a kookaburra and a bilby on them which my husband found on ebay from a supplier of sterling silver charms.

Dangly spangles can be an issue with sewings but it's amazing how many things you can find to make that don't need sewings.

If the idea of spangles and bobbins are to make up a picture of your life then these two bobbins and their spangles who what has been the best bit of my life for the past 7 years.  Each time I get these out I touch a little bit of what makes my husband the man he is ... Australia.