JACK SMITH - or not the Acorn Bobbins 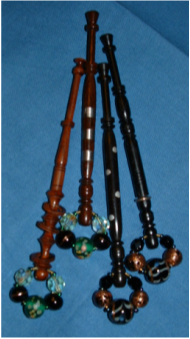 In January 2004 my husband (now who was 'to be' then) came back from Australia to live again in the UK.  When he flew in we went on a tour round some of my favourite places; Stratford upon Avon, Worcester, the Cotswolds and the city of Chester.  Just off from the Elizabethan shopping runs there used to be a small needlecraft shop and when we visited there on that trip I bought four bobbins.

They are a little chunkier than my normal choice, but there was something about the feel of them that made me want to buy them.

Two of the bobbins (one rosewood and one ebony) have inlays of pewter... Perhaps a foretelling of my obsession with Chris Parsons' beautiful inlaid pewter bobbins.  A fellow lacemaker has suggested that these two bobbins may well be by Acorn Bobbins, but we have now taken to calling them my 'not Acorn Bobbins'.

However, I have made a discovery.  While browsing Jo Firth's stand at an ISIS laceday, I saw the banded pewter bobbin but in ebony.  I asked if either Jo or her husband, Ash, knew who the maker was but all they could tell me is that were made by a maker from Cheshire who they bought the stock of when he stopped turning bobbins.  This bears out my buying them in Chester but draws me only a little closer to identifying them.  I emailed the group and whilst they remember a bobbin maker they couldn't put a name to the maker.

Of the other two; one is ebony with a silver ring whilst the other one is, if I remember correctly, tulipwood with rings made from the same piece of wood surrounding the base.

Recently, we discovered that this bobbin turner was Jack Smith who was active in the North Wales / Chester area late 90s to 2000s.