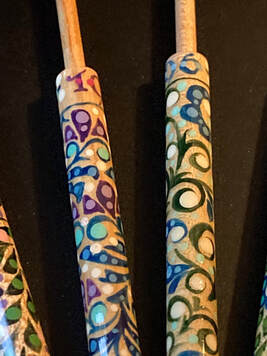 Barry Biggins
Barry & Caroline Biggins's work was distinctive for its floral and swirls.  Mainly active through the 80s and 90s, these now sought after bobbins were predominately Honiton however east midlands also exist.

Caroline and Barry Biggins, based in the heart of Devon, at Newton Abbot, were both qualified art teachers.  This showed through the colours and designs that Barry used in both his bobbin painting and in the designs that they created together for Honiton patterns.

Caroline attended evening classes in Honiton lace for fourteen years before taking up a teaching class herself in 1980. Barry began designing lace in 1985.