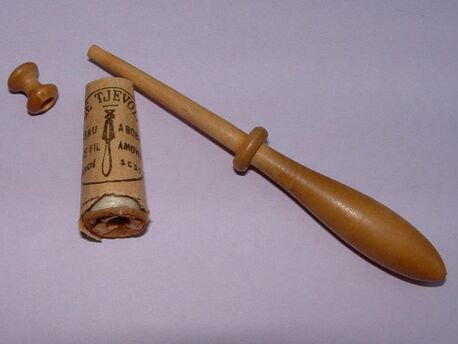 Back in the early 90s, when I learnt to make lace, I worked in North West London for BT - in and out of all the telephone exchanges.  (In fact I learnt to make lace at Willesden Telephone Exchange).  I spent a lot of time working at Kenton telephone exchange and the tube stop was just down the road from where I worked, at Shoot-up Hill, Kilburn.  On the bridge at Kenton Station was a small treasure trove of a needlecraft shop called De Denne (it was located at 159/161 Kenton Road).

Most people bought DMC threads and wools, but they had bits and pieces going back decades that were tucked in drawers.  As the shops on the bridge were being gradually closed down to make way for a new development, they were pulling out all sorts of things and selling them off.  Being on a tight budget, I did the classic thing of buying things because they were reasonable, even though I have absolutely no use for them.

However, one day the lady in the shop pulled out a lace bobbin that was about an inch shorter than any other I had except, on my travel pillow so I bought this bobbin to use as gimp bobbin for the travel pillow.  The lady tried to sell it to me as a time saver as it came with a pre-wound spool on the neck of the bobbin, but as the thread looked like DMC 30 but was discoloured I doubted if I would ever use the spool.  To be honest, I think I really bought it because it was a curiosity.

Strictly speaking, this is not an unknown maker as the bobbin clearly says that it is Le Tjevoli but as I have no idea who that it then I think I can say it's unknown.

The label has the following words on it; Le Tjevoli, fuseau bobbin, porte-fil, amovibie. My French is a little rusty, but with the help of google translate I can say that this says roughly that it is a ready filled spool of yarn on a bobbin (like I hadn't worked that out).  I can find no straight translation for amovibie but amovibile is kind of pushbutton which might explain the top of the bobbin that comes off.  I have found a reference to this particular bobbin in a book on needlework accessories.

I have tracked down a French blog, which explained that the brand name; Le Tjevoli was an anagram of the couple who invented it, A Mr & Mrs Jolivet.

Madame Jolivet was an experienced lacemaker who in 1899 won a medal at a national exhibition for her work.  She also taught in their shop, based in Le Mans.  The Tjevoli bobbin came out of this.

If anyone has any further information to add to this then I would be very interested in hearing from you - do email me at thelacebee@btinternet.com